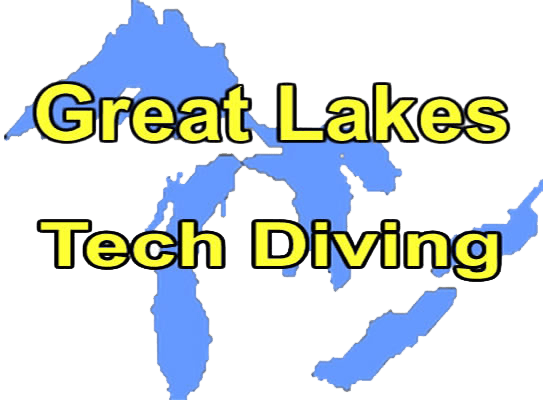 The wrecks in the Straits of Mackinac are fabulous and accessible to most experienced divers.  We will be on the boat in the morning for two dives.  That leaves you the rest of the day for sightseeing, a trip over to Mackinac Island, or a nap!  Potential wreck dives include the Cedarville (600-foot steel freighter, max depth 100′), Eber Ward (213-foot wooden steamer, depth 130′), the recently discovered “almost virgin” schooner Dolphin and others.

Charter fee is $600 per person (3 days of diving). Motel and all other travel arrangements are your responsibility.

Lake Superior is home to some of the most pristine wrecks in the world. That’s because zebra and quagga mussels have not been able to flourish in Lake Superior as they have in the lower lakes. That means you can still see bare wood with paint still visible. On some wrecks, you can read the ship’s name painted on the transom! Possible wrecks include the Vienna, John Osborn, John B. Cowle, and Samuel Mather.

Charter fee is $790 per person. Motel and all other travel arrangements are your responsibility. Maximum depth will be 200′.  Trimix Diver certification required.

Join us Labor Day weekend as we invade Canada to dive one of the most talked-about shipwreck discoveries of the last decade. If you’ve been to any dive shows around the Great Lakes in the past few years, you probably saw presentations about the Manasoo.

Manasoo was a steel steamer, 155 in length, built in 1888. Her final voyage began Sept. 11, 1928 in Owen Sound, Ontario, at the southern end of Georgian Bay. Her cargo was to be cattle. She stopped at several ports picking up cows. On Sept. 14, she departed Manitowaning to return to Owen Sound. She ran into a vicious storm and developed a list. Captain MacKay decided to beach her on Griffith Island, but as the list worsened, she began to take water through her gangway and other openings. She slid stern first into deeper water, taking only 5 minutes to sink. Sixteen of the 21 passengers and crew perished. The survivors spent 60 hours on a raft before being picked up.

Manasoo was discovered on June 30, 2018 by wreck hunters Jerry Eliason, Ken Merryman and maritime historian Cris Kohl. The wreck’s location was kept secret for several years while they surveyed and documented the wreck. They eventually released the location to charter operators to begin taking a limited number of divers to the wreck. She is mostly intact, especially at the bow. Along with cattle, a 1927 Chevrolet coupe was on board, a somewhat unusual artifact to see underwater!

Charter fee is $650. Motel and all other travel arrangements are your responsibility. You must able to legally travel to Canada for this trip. No refunds if you are turned away at the border. Depth is approximately 200′. Trimix certification required.